Seriously, I feel dumb. Like, all the time. It wasn’t always this way (I’m pretty sure), but in the past 2 months, I think my IQ has dropped below the level of possible IQs. Yeah, that happened. Didn’t think it was possible? Well, I have set a new low. So now everyone in the world can feel super intelligent!

My memory has plummeted – I used to remember anything and everything, but lately I can’t even remember basic math. Oh, did I mention that I have a Bachelors in Mathematics from SUNY Geneseo and a Masters in Mathematics Education from Teachers College, Columbia University. Mhm, great.

I constantly forget words that I want to use in order to finish my complete sentences. And it’s not even like “oh, it’s at the tip of my tongue” or “it sounds like this” or “another word for this.” I don’t even think a quick game of charades would help my plight. My mind just stops and turns into a big black hole of ideas and words. And then I start panicking because I should know this! Why the heck can’t I think of what I’m trying to say or do? So those complete sentences get completely butchered and most of the time I can’t even salvage them with a synonym or parallel idea.

So then the people I’m talking to get frustrated, and then I get frustrated. We all get a whole lot of frustrated because I can’t freaking finish what I was trying to convey to them. Or I’m completely wrong about something because I simply didn’t think my idea all the way through, usually because I panicked from the lack of remembering, and now my credibility starts to be whittled down.

Tom has noticed it too. There have been many times where we’ll be talking and I’ll say something so dumb and he’ll call me out on it. And then I’ll realize just how stupid it sounded or how ridiculously wrong it was and recoil in embarrassment. He started by calling them dumb blonde moments, but then they began to be too frequent to be dumb blonde moments. And it wasn’t just me trying to be silly or act dumb; they were honestly lapses in my brain and train of thought.

What is happening to me? How can I be 24 years old and having this much of a difficult time remembering basic facts? Why have my math skills plummeted when I just finished school 2 months ago?

I’ve wondered if I’m developing some sort of early onsetting Alzheimer’s. My mom has Multiple Sclerosis, and I know that ‘thinking problems’ is a symptom of that; could I be showing early signs of MS?

I figured I’d go to WebMD (super reliable, right?) just to see what kinds of conditions they might suggest I have with my given symptoms. I put in:

Side note: When I put in that I was having difficulty concentrating, the following question popped up on the screen:

Maybe it has something to do with too much or too little oxygen while diving that might screw someone up? Just thought the question was quite random when it popped up.

Anyways, my results came up as follows:

…and they just continued to be less and less likely, so I’ll stop at Asperger syndrome. After the main possibilities, they just ended up being listed in alphabetical order. MS did make it on the list, after Marijuana use. Goodnes gracious.

So the first plausible cause (unless I am depressed and don’t know it) would be sleep deprivation. Hm, that would make sense…

See, I live in Long Island and work at a school in Brooklyn. Every weekday, I wake up at 5 a.m., get on a train at 5:54, arrive at work around 7:45, leave work at 3:30 p.m., hop on the 4:19 train from Penn Station, and don’t usually get home until around 6:30 p.m. After I get home, I shower, eat dinner, watch TV, and hang out with Tom and his parents. My typical bed time ends up being around 10:30 since showering and eating dinner kind of perk me up and then I want to hang out and talk with everyone before doing it all over again the next day.

I have a Fitbit, so I’ve been able to keep track of how many hours of sleep I get per night, as well as how many times I’m restless during the night. It’s actually really interesting and I usually spend more time paying attention to the sleep log than of how many steps I’ve taken throughout the day.

According to my Fitbit log, I barely get more than 6 hours of sleep each night during the week. Sometimes I might catch some shut-eye on the trains, but it’s not enough to say so, and it never gets to REM sleep, the most important kind of sleep that gives your body the rest it needs.

Interesting enough, this past week I read an article from BBC about how sleep deprivation affects students’ performance in school. It focused on the fact that the lower performing schools tended to have more students that suffered from lack of sleep than those countries who performed better.

The findings are not cut-and-dried; just looking at the first bar graph in the article (shown below), it is clear that not all high-performing countries’ students are getting enough sleep. And the lowest performing countries are not all suffering from sleep deprived zombie children, either. For example, Finland has been at the top of the charts for math and science performance for years now (although, surprisingly, this past December, a report came out that their scores dropped, bringing them down to 12th in the rankings), but they are nowhere near the countries whose students are getting the most sleep. 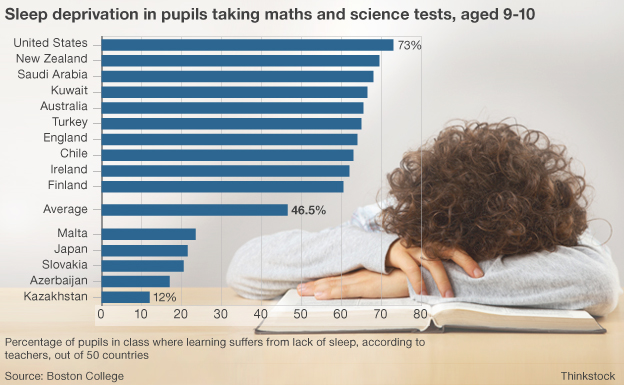 Fun education facts for you all out there!

So the BBC article points to technology as a possible culprit for lack of sleep. According to Dr. Karrie Fitzpatrick, the light from computer, tablet, or phone screens, “…can reset the whole circadian rhythm system and say, ‘Wait a minute, it’s not time to go to bed’.”.

Coincidentally, I am one who has always fallen asleep with TV or Netflix running next to me. Sometimes, if I just try laying down in bed and going straight to sleep, my mind starts racing and concentrating on the things I need to do the next day, causing me to become anxious and more awake than I was when I laid down. So Netflix allows me to concentrate on something else, and I usually fall asleep within about 10 minutes of laying down while watching a show or movie.

Tom had told me about the light screwing with circadian rhythms before, scolding me for having my computer on while trying to fall asleep at night. He mostly did this because when I get tired I get cranky. And when I get cranky, he usually receives the brunt of my terror. I apologize Tom. And anyone else who has endured my overtired wrath.

He told me there’s an app that is meant for using screens at night, and I actually found it in another article from Business Insider. It’s called f.lux and reduces the bluish light that LCD screens emit and screw with our sleep.

Luckily for me (and everyone else!), the effects of sleep deprivation can be reversed with a return to sleeping 7 to 9 hours regularly. So this week I’m going to try to fall asleep without a screen in front of my face. If I find my anxious thoughts make it too difficult to fall asleep normally, I will use the f.lux software to turn the brightness down and hopefully still reap full benefits of sleep.

And if I’m still dumb after getting more sleep, then I guess it’ll be wise to go to a doctor and get it checked out.

I just really hate how this has affected me, so I’m determined to get back to a normal state of intelligence. Sure, I’ll definitely have dumb blonde moments, but they’ll just be a silly, infrequent occurrence as opposed to all day, everyday. Happy snoozing everyone!